These antidepressants for anxiety may have limited effectiveness 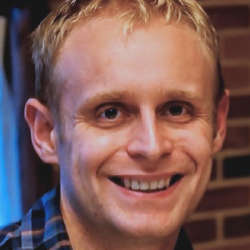 Doctors often prescribe antidepressants, such as paroxetine (Paxil), fluvoxamine (Luvox), or sertraline (Zoloft), for the treatment of anxiety. Many antidepressants fall into the category of medications called selective serotonin reuptake inhibitors (SSRIs) and are approved for the treatment of anxiety disorders, such as Generalized Anxiety Disorder and panic disorder. However, new research indicates that SSRIs may provide little benefit in relieving symptoms of anxiety.

Our group of researchers at Wayne State University and the Harvard Medical School analyzed all clinical trials examining the benefit of the SSRI paroxetine compared to placebos in the treatment of Generalized Anxiety Disorder (GAD) or panic disorder across all trials sponsored by the drug's manufacturer, GlaxoSmithKline (GSK). According to GSK, 12 clinical trials have been done, although four of them were not published in medical journals. We examined how much improvement individuals in these studies made on the Hamilton Rating Scale for Anxiety, one of the most frequently used measures of anxiety symptoms. The scale has a maximum score of 56 points. Higher scores represent more severe symptoms of anxiety. At the beginning of the trials, the average scores in each sample were between 19 and 26 points. 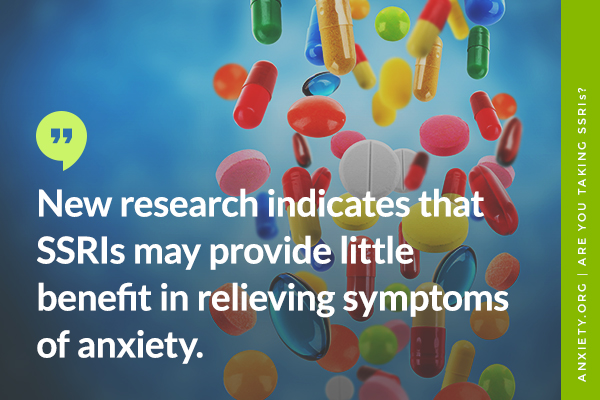 Our study is the first large-scale analysis of an SSRI compared to placebo in the treatment of anxiety; previous analyses have focused on the treatment of depression. Although our study is limited to only one medication, previous studies have found that all second-generation antidepressants have comparable effectiveness in treating depression.1 Thus, our results may generalize to other antidepressants, although further studies are necessary to support this proposition.

Antidepressants' Benefits may not Outweigh Risks

Overall, the benefit provided by paroxetine in the treatment of anxiety is small. As a result, the benefit may not be substantial enough to warrant a recommendation for them to be used as a first-line treatment in clinical practice, given the side effects associated with SSRIs. 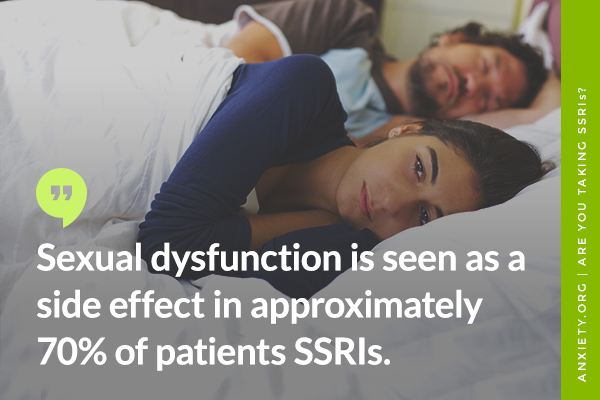 One common side effect of SSRIs is treatment-induced sexual dysfunction. Sexual dysfunction is seen as a side effect in approximately 70 percent of patients taking paroxetine, and most other SSRIs produce similar rates.2 Other side effects include drowsiness, insomnia, and long-term weight gain. Rare but more severe risks include increased suicidal thoughts in children and young adults and serotonin syndrome, a life-threatening adverse reaction to the medication. Furthermore, patients are much more likely to disclose negative side effects on a questionnaire rather than tell their doctor about it, which is the traditional method of obtaining side effect data in clinical trials.3 Thus, published findings may underestimate the true level of adverse effects. In addition to side effects while taking antidepressants, there are also withdrawal effects following discontinuation of the medicationthat may trigger a relapse of symptoms.4 These withdrawal effects may help to explain why most people stay on antidepressants for two years or longer.5

But Treating Anxiety is Within the Reach of Many

Many people report experiencing a great deal of benefit from antidepressants for their anxiety. However, because individuals given placebos experience a similar benefit that was almost 80 percent as effective, most of their improvement is not due to the specific ingredients in the drugs. Notably, people who receive placebos fare much better than those given no treatment at all, such as individuals on waiting lists to be enrolled in the clinical trials.6 These findings indicate that taking action to enroll in a treatment program and participating in some type of intervention may be therapeutic in itself. The belief that an individual is receiving treatment (even if that treatment is as simple as a daily sugar pill) is a major component of symptom relief. The specific chemicals in the drugs may be less responsible for the improvement, and these drugs come with risks.

Psychotherapy is another treatment option for individuals suffering from anxiety. It does not carry the antidepressant-related risks such as the side effects and withdrawal effects and a recent study found that 75 percent of patients prefer therapy over psychiatric medications.7 Short-term studies have shown comparable effectiveness between antidepressants and psychotherapy. However, longer comparisons show a clear superiority for psychotherapy over antidepressants.8,9 Psychotherapy, when conducted properly, is aimed at not only providing support and relieving symptoms, but also at helping individuals to develop and practice skills to prevent future occurrences of similar symptoms. This skill development is absent with medication intervention and may be part of the reason for psychotherapy's long-term superiority as a treatment.

Our study demonstrates that paroxetine provides only a modest benefit in treating anxiety. We believe that this benefit is not large enough to justify SSRI use for anxiety, given the risks associated with the medication. For individuals looking to take control of their anxiety, it is important to understand the limitations of antidepressants and to know that other options are available. Talk with your doctor about psychotherapy and other treatment options that could be well suited to you and your symptoms.

10Michael Sugarman, Amy Loree, Boris Baltes, Emily Grekin, Irving Kirsch. The Efficacy of Paroxetine and Placebo in Treating Anxiety and Depression: A Meta-Analysis of Change on the Hamilton Rating Scales.PLOS ONE, 27 August 2014; DOI:10.1371/journal.pone.0106337