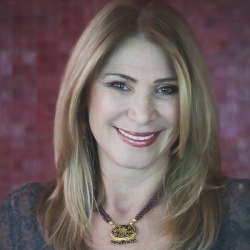 I'm very big on Sigmund Freud because he was a genius in many senses. He introduced the concept that is invaluable in my practice: repetition principle. The textbook term is repetition compulsion and refers to when a person is trapped repeating a traumatic event over and over again. In my practice, I focus on healing these wounds.

I've designed the Be the Cause Mind Map System for Healing Human Disconnect ® as a guide for my patients to get away from their wounds and pain, and find peace. There are nine places on the Mind Map we must visit, and the last place is hopefully somewhere you feel healed and ready to move forward from.

Allow me to introduce Sarah*, an 11-year-old girl who experienced panic attacks whenever she would get dropped off at school. The wave of separation anxiety that swept over her made it nearly impossible to go to school. This frustrated Sarah's mother because when class was about to start, Sarah would cling to her. So one day, Sarah and her mother came to me in hopes of figuring out why this was happening and to make it stop.

Parenting plays a role in your child's life from the moment they are born. Parents impact their children in small ways that leave enormous imprints. Thus, in the beginning of treatment, I try to figure out all the details about the relationships my patients have with their parents.

Was he/she placed in an incubator?

Did the parents work a lot?

Was there a nanny involved?

Was there both a mother and father figure in his/her life?

What was the relationship like between the mother and father?

Were there times when he/she was separated from her mother for a significant length of time? For example, mom was hospitalized or had to go on a work trip.

After doing a thorough history on her relationship with her mother, I discovered that Sarah's mom had to go back to work when Sarah was only three months old.

While her mother was gone, Sarah's grandma took care of Sarah. This meant that Sarah was not able to form a secure relationship with her mom. This was the wound that never had a chance to heal. And because it never healed, it reopened whenever Sarah experienced any sort of separation. Especially considering the fact that her father has been completely out of the picture since Sarah was born.

The Vital Roles Parents Play In A Child's Life

The father is often the infant's first experience of the world outside of its mother and itself. If the father nurtures the mother, the mother can remain emotionally grounded in his strength, support and resilience. This has both a direct and indirect positive effect on the infant. Father becomes a true hero, guiding his children to the light at the end of the tunnel, but if the father is physically or emotionally unavailable, this direct and indirect negative effect will inevitably fail both the mother and the infant.

In the Mind Map, the Double Dungeon represents the lack of emotional and physical nourishment from mother, and the lack of support from father. When both mother and father fail to provide emotional and physical nourishment and support, the child has no place to turn but inward. Since a child is emotionally undeveloped, the child is trapped within this helpless, hopeless state and can easily deteriorate emotionally and psychologically from the inside out.

It is the father's duty to help create a safe foundation for his child and aid in diminishing the damages of a deficient mother/infant bonding. Father does this by loving and supporting his partner and by providing the supplements of nourishment to his child that the mother is unable to adequately supply. It is the father who can unlock the imprisoning bars of the dungeon and release the child from a sense of insecurity in its world with its mother.

Showing Sarah Her Present-Day Reactions To An Old Wound

After explaining this, Sarah looked at me confused and said, "Really? The fact that my mom went back to work when I was three months old is actually affecting me today?" Here's where I had to be very creative in our communication.

I asked Sarah to tell me something that was very special about her day, maybe what happened during her art class. She proceeded to tell me about her day, but what I did was pick up my phone and pretend to ignore her. I threw in some, "Oh yeah? How nice," to make it seem like I was listening. As I started to look away and get more involved with my phone, Sarah began to lose her train of thought. I could only stand to do this for roughly 20-30 seconds because this hurts me too.

At the end of the exercise, I looked at Sarah and asked, "Oh what's the matter?" And she replied, "Dr. Judy, I thought you were listening to me, I don't understand. I feel like you weren't listening, you weren't there."

I asked Sarah, "Am I your mom?" She shook her head no. Then I asked her how much time she thought had past. She told me it felt like "ages" and was shocked when I told her it was roughly only 20 seconds.

The point of this exercise was to get Sarah to understand experientially that if a mere 20 seconds of disconnection could cause so much upheaval and confusion within her, imagine what it must have been like as an infant when the primary caregiver—the mother in this case—was no longer available after three months.

The separation of mother and baby during the developmental stages creates a message that becomes encoded deep within the psyche of the infant: "I am not loveable or important." And although the pre-verbal infant Sarah was not able to cognitively process this information at the time and make sense of it, it still made its deep impression within and skewed Sarah's view of herself and the world. The discoloring of Sarah's lens of self-value, due to the disconnection with her mother, resulted in Sarah's inability to part with her mother now.

Tragically, the needs of the modern-day world sometimes take precedence over the needs of the infant. In Sarah's case, her mom had to go back to work when Sarah was three months old. But sadly, nature doesn't care about the realities of paying the bills, needing sleep, or having a life separate from the infant. Infants require nearly 24/7 attention and attunement for healthy bonding. Any disconnection between mother and infant at this critical stage will cause some injury and depending on the severity of these wounds, potential suffering in childhood, adolescence and adulthood.

Adding Structure To The Chaos That Is Anxiety

I wish you could see the look of relief on Sarah's face when I used that language. One of the aspects of anxiety is that people feel uncontained, uncertain. That's why when I lay out this map, my patients begin to feel that their anxiety is controllable, that anxiety doesn't just happen, and that they have power over it. It's all a matter of putting things into perspective and navigating through the chaos.

Healing Starts With Identifying The Source Of Pain

Panels 1, 2 and 3 of the Be the Cause Mind Map® work to help patients find the root of their problems. First, we identify the initial wound, then discover our past and present-day reactions to that wound, and finally, learn how that wound was and is encoded into our psychopathology.

Panels 4, 5 and 6 deal with dismantling the old paradigm of suffering while Panels 7, 8, and 9 focus on forming a new paradigm for healing, integration and harmony.

What happens is that people will repeat things from their past and they're doing it because they want to heal the original wound. It's kind of like charades, they're play acting something. But this isn't much fun because they're hurting themselves. Through this acting out of their original wound they're really showing the world and showing themselves that something is not finished. I believe that the unhealed emotional wounds of the past have a way of externalizing themselves into our present day lives. But we don't understand that from the get-go because this is all done on an unconscious level. In the course of my therapy, I lift this unconscious veil and reveal to the patient that they are reenacting an old wound that was just never cleansed, addressed, or healed. The poison was never let out, and it's still poisoning their lives.

Panels 7 Through 9: The Healing Process

The most difficult part of the Mind Map is digging through the past and discovering our old wounds. Upon discovering the source of our present-day pains and anxieties, we can then work to heal those past wounds and change our lives for the better.

As you read in Sarah's story, we determined that her separation anxiety was rooted in the fact that her mother was not available to her when she was a baby. What psychologists and psychiatrists tend to do in these cases is:

Try to use the cognitive and behavioral to cure. In my opinion, this never works deep enough. I couldn't tell Sarah, "Don't be upset! This will pass!" You might get more upset at me because I'm not really understanding what's wrong. I find that the most effective therapy understands issues rooted deeper than cognitive function. And that's why I developed the Mind Map to help me and my patients dig deep to find the origin of their problems.

I don't want to scare you and make you think that panels 7 through 9 are impossible to navigate, but I want to remind you that the healing process is unique to the individual. Although some studies suggest particular techniques for anxiety disorders, you're the only one who will know what works. This final stretch of the Mind Map requires you to be open and honest with your therapist. I know that I want the best for my patients and am willing to try a wide variety of techniques if that's what it takes. When ready to embark on the journey of healing, keep this in mind: it's going to be long and hard, but happiness lies at the end of the map.

*All names have been changed to protect patient confidentiality