The facing-the-viewer and threat bias 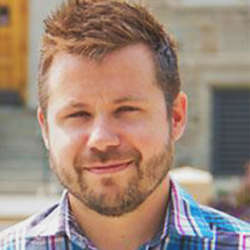 Part of the challenge that is overcoming anxiety—as those with anxiety disorders can attest to—lies in what researchers call the "threat bias." The threat bias is the extra attention anxious people devote to the threatening things in their environment. These things can be external (e.g., angry faces or voices) or internal (e.g., worried thoughts about bills, appointments, etc.). People with high levels of anxiety are consistently found to display a corresponding threat bias, and this can make anxiety disorders very difficult for people to overcome on their own. The added worries they experience causes more stress and aggravates anxiety.

I have been interested in this phenomenon and have been studying it for the previous four years in the Biomotion Lab (www.biomotionlab.ca) at Queen's University. During this time, I have studied the way that anxiety affects this perceptual bias, and also ways of reducing this bias.

The Link Between Facing-The-Viewer Bias and Anxiety

Some researchers believe that the facing-the-viewer bias is similar to the threat bias. That is, the default perception one might have of a point-light figure facing towards them as opposed to away—defined as the facing-the-viewer bias—can be perceived as more threatening. If this is the case, then those with a high degree of anxiety should also have a strong facing-the-viewer bias. In fact, not only did we find that this is true, we also discovered two key things that can reduce this phenomenon: exercise and progressive muscle relaxation.

Observing the Effects of Exercise and Muscle Relaxation

We ran two separate studies in succession. First, we had people exercise by either walking or jogging on a treadmill, and then measured their facing-the-viewer biases by showing them a point-light figure and assessing whether they observed the figure as facing towards them or away. We then compared their biases with those of the control group (i.e., a group who were asked to simply stand on the treadmill rather than exercise). Both walking (5 km/h) and jogging (8 km/h) significantly reduced facing-the-viewer biases compared to the control group (0 km/h), meaning that these participants, in theory, perceived the world in a significantly less threatening fashion.

To be sure that this effect was not completely accounted for by the physiological effects of exercise, we then had people perform progressive muscle relaxation and deep breathing exercises together, or perform a control task like filling out word searches. When we measured each group's facing-the-viewer biases immediately after these tasks, we found that those in the progressive muscle relaxation group had—just like those who exercised— significantly lower facing-the-viewer biases that the control group (those doing word searches).

What a Little Bit of Movement can do for Your Anxiety

These studies provide evidence that both exercise and relaxation techniques can make us see our worlds a little less threatening. This should also hold true for thoughts, meaning that exercising and relaxing should cause us to worry less. Whether this is indeed true will require more study. Even so, the many other benefits of taking time to exercise or relax more appear to outweigh the costs.

While we did not look at the mechanism by which anxiety was reduced in our study, there are many theories for why exercise or relaxation help with stress. One theory for how exercise reduces anxiety is that it provides people with an explanation for their physical tension and stress. For example, if someone's heart is beating fast, they often sense that tension and then put a label on that sensation (e.g., my heart is racing because I'm nervous). These thoughts can escalate and make anxiety worse. Sometimes this process can escalate enough to cause panic attacks (i.e., a sudden rush of physical and psychological symptoms of fear that are quite scary to the person experiencing them). Exercise helps to provide your body with an alternate explanation (e.g., my heart is racing because I'm exercising), which can help to reduce anxiety. On the other hand, relaxation techniques are aimed at reducing physical symptoms of anxiety (e.g., muscle tension, heart rate), which also reduces anxiety by preventing people from interpreting physical sensations as fear.

As seen with military and law enforcement training, physical exercise, besides reducing anxiety, will also help to strengthen self-esteem. While psychologists are often concerned with helping people identify their negative thoughts, it is also important to recognize which activities are producing positive thoughts. Imagine setting the goal of going for a walk after work. Previously, you may have been thinking thoughts like, "I don't get enough exercise." Thoughts like these make us feel guilty and add to our stress. After you have achieved your goal of exercising, however, you may now experience positive thoughts like, "I'm glad I went for a walk—I feel better and I proved I could do it." These thoughts go beyond simply eradicating the guilt and stress of not exercising. They provide a positive boost to your mood and reduce stress.

In the future we will continue to study how anxiety affects perception. The processes at play are complex and incorporate a broad range of contexts such as the culture and society we live in as well as our genetic predispositions. To date though, the data is overwhelming in its support of anxiety-reducing activities such as exercising and relaxation techniques in improving our mind and body. So find something that interests you and try it out!